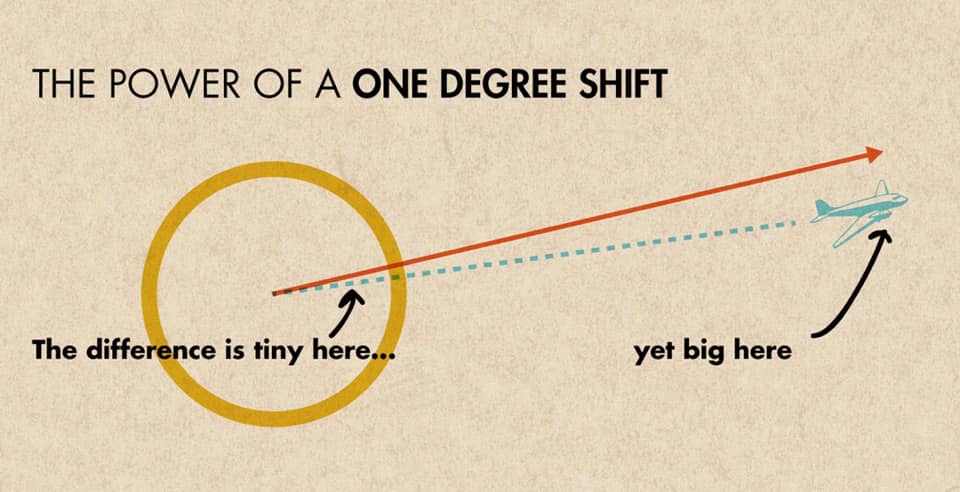 I was recently reflecting on some coaching conversations and thinking about vectors. Let me explain:

In math and physics, a vector is a?quantity having direction as well as magnitude, especially as determining the position of one point in space relative to another.

If a pilot makes the slightest one-degree error in the aircraft’s flight path, after traveling one mile the plane will be off the course by 92 feet. And after going 60 miles, that error adds up to being a mile off the path.

A minor off course adjustment over time and distance magnifies the error. If a pilot were flying from New York to L.A. a one-degree shift in the flight path over the entire course would put the plane 40 miles to the South in Orange County at SNA not Los Angeles at LAX.

“The secret of your success is found in your daily routine. You alone are responsible for what you do, don’t do, or how you?respond to what’s done to you.” Darren Hardy, The Compound Effect

I work with a lot of entrepreneurs, and many times they call with a complete overall idea – overwhelmed and burned out – yet many times it’s just the 1-degree change that compounds over time. Yes? Who can relate?

The compound effect, it works both ways. What small course correction can you make this week?

Mark Johnson
Mark is the Chief Executive Officer of JP & Associates, a rapidly growing full-service real estate brokerage. He is focused primarily on expansion and productivity. He has invested nearly 20 years in understanding the inner workings of high performing real estate agents, teams, managers, and leaders in major markets across the world. In prior assignments, he served as a Business Coach, in progressive leadership capacities for the 5th largest US-based real estate brokerage firm; in sales and customer marketing leadership capacities for a major consumer goods company; and served a stint in the US Army, Medical Service Corp. He was later recalled to active duty during the desert storm campaign.

Mark is a father of 3, lifelong learner, Spartan and adventure athlete. He earned his MBA from California State University and a Behavioral Change Certification from the National Association of Sports Medicine. A number of years ago he decided to make "One Helluva Move" and not play it safe, and since then in his spare time he has climbed the world’s tallest free-standing mountain - Kilimanjaro; completed the Spartan tri-fecta, the LA Marathon and the world-famous Iowa border to border RABGRAI ride among other crazy adventures.